Disassembling materials and recycling for a second life

When materials made up of several components reach the end of their lives, imagine being able to separate the different components in order to recycle them and give them a new lease of life.

That’s the aim of LIST’s FR4Recycling project, which stands for Flame Retardant for Recycling.

But the process for fire retardancy is actually an old process. It is known that in the presence of heat, intumescent flame-retardant additives will produce a char that protects the material from fire.

Abdelghani Laachachi, the head of the project explained, “We took this idea, an idea that has been around for years, and used it to disassemble composite materials,” he said. “Imagine we have multi-layers like an aluminium sheet assembled with a composite plate for example, the composite will age of course, but the aluminium you can use as it was originally with a bit of cleaning and you’re done”.

Currently there are problems to recycle certain materials due to the processes used in the past but what Abdelghani and his team are researching, is adapting that process right at the start materials’ lives. “We are looking at using this method from the start so that when a composite material reaches the end of its life, we can use thermal treatment to separate materials and reuse either for the same thing, or for something different,” he stated.

But how exactly is this achieved? “The idea is to incorporate additives within the adhesive right at the start, that will in the future, be used to separate the elements at the end of the material’s life. Once the end of life of the product is reached, this additive - that’s still there - is then activated to separate layers and components”.

Abdelghani went on to give an example to help understand the process: “For old wallpaper, what do we do to unstick it? We heat it with steam. It is sort of the same concept. Within the wallpaper adhesive there are elements that with humidity and heat will unstick. So it is close to the same thing we do”.

The project began on 1 April this year but before it was presented, a first phase of preliminary tests was completed, helping the project define an approach. The concept of FR4Recycling project was then validated and a patent has already been filed.

“Those preliminary results helped us convince the reviewers, with an approach that experiments with activation temperatures,” explained Abdelghani. “We try to expand this approach to the maximum, and propose different systems, for example a system activated at 300°C, another at 250°C, another at 400°C; and we are currently in this phase of screening. We are playing with different ingredients while verifying that we don’t affect the properties of the adhesive, because actually we use an adhesive glue to stick the different parts of the assembly together and when we add additives, we need to verify the that the glue properties are not affected by the presence of this additive”.

So what are the targets for the FR4Recycling project? Abdelghani elaborated. “Once we have optimised this system with a specified temperature and verified the adhesive properties, we will see about discussing with certain industrial companies to find collaboration, certainly as we have filed a patent. Or we could try and sell a licence to collaborate and try to optimise their application further”.

Currently the project does not have any partner. But since it was accepted for funding by FNR, it gives us the opportunity to be more visible in the field of composites recycling and to find relevant collaborations in that field. Once FR4Recycling is in full swing, the aim is not just recycling and the environment, but also sustainability for materials that would otherwise not live second (or third) life. 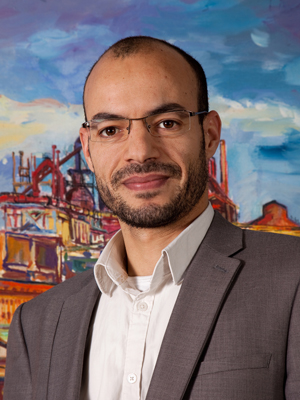